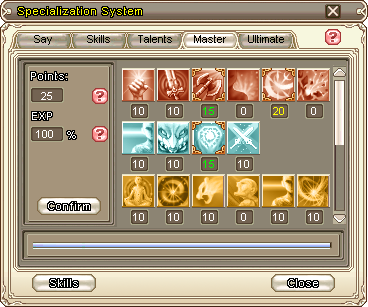 How to Gain Specialty Points?Edit

On the interface click “Confirm” to select a percentage of EXP gained from fighting monsters that will be taken and received as specialization EXP. Players must earn 3,500,000 specialization EXP to acquire 1 specialty point.

The other alternative is to use a Stone of Special Insight, which grants 1 specialization point.

For every character class, there are 6 Master skills, 4 Myth skills, 6 Legend skills, and 4 Extreme skills. Each of these four sets of specialization skills are unlocked when a character reaches a further level (45, 60, 75, and 91, respectively).

Each specialization skill can be maxed to level 10 by default. Further level increase can be done through super and ultimate specialization.

Each time an Specialization Skill is leveled up, a definite amount Specialization Points are used up. The amount of points required depends on which set of skills is involved (Master, Myth, Legend, Extreme), as well as the deepness of specialization (Normal, Super, Ultimate).

In order to gain access to Myth, Legend, or Extreme specialization skills, as well, as Ultimate specialization, the character must have reached the respective levels listed above.

The following table lists the cumulative Specialization System point costs, calculated from the former one.

Note that following the strategy of upgrading every available skill to L10 will result in the following SP costs.

The L10 strategy requires a total of 960 specialization points to be fulfilled, leaving up to 185 SP available for Super and Ultimate specialization. For non-reincarnated characters that will only have 1 Ultimate and 2 Super specializations available, such remnant is enough to acquire —for example— a L20 Legend-tier skill, and two L15 Myth-tier skills.

How can I reset my specialization skill level back to 0?Edit

You can either rebirth your character and keep your points or talk to General Store Owner in any of the major cities and purchase a Specialization Reset Stone 1. Purchasing the reset stone will make you lose those specialty points and you will have to farm them again. You can reset the super and ultimate specialization done on any skill back to level 10. These points are also lost when reset.

Why can’t I utilize my specialization system benefits after reincarnating?
Specialty Point cost to level all skills to Lv10: 960 points
This means you have 185 points left to utilize if you max all skills to level 10.

Retrieved from "https://grandfantasia.fandom.com/wiki/Specialization_System?oldid=293542"
Community content is available under CC-BY-SA unless otherwise noted.