What is Guild War?

Max amount of players from each side is 75. Having allies do not increase the limit.

How do I sign my guild up for Guild War?

There's no level required to sign your guild up for GW! To register, you need to go to the NPC named "Receptionist" in Kaslow (x=31, y=293). You can register for and withdraw from from Guild War up until one day before the competition ladder is announced (it is announced after each maintenance). Only the guild leader can withdraw or register for GW. If there is more than 8 guilds signed up, the top 8 with the most reputation will get the spots. If there's less than 8 guilds that registered for GW, they auto-select the top 8 guilds with the most fame that week to fill the remaining spots. The winning guild will not be signed up automatically each week so they can have a chance to sign up for the guild war fo their choice (Kaslow, Ilya or Jale).

How do I check the Guild War schedule?

To check the schedule for your server talk to the NPC named "Colonel Kira" in Kaslow (x=30, y=294) 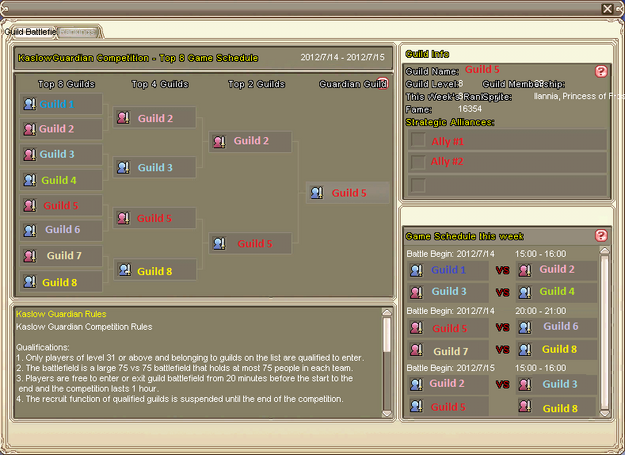 If you click a guild, their guild info shows on the right, like the picture shows with "Guild 5." You can see their level, amount of members, amount of prestige, their rank, the amount of fame they gained the week they registered, their sprite king and most importantly their allies. As mentioned earlier, each host guild can have up to 3 allies each.

I successfully signed up for Guild War! What's the objective and how do I achieve it?

Your objective is to defeat the opposing guild(s)! There's three ways to win a war:

What is the benefit of participating in Guild War?

By participating either as a member of one of the host guilds or as a member of a guild allied to one, you will gain "Crystal Guardian" fame, often called Guild War points for short. This is how it looks in your Fame tab of Adventure Log:

I'm inside the Guild War Arena, where do I go? 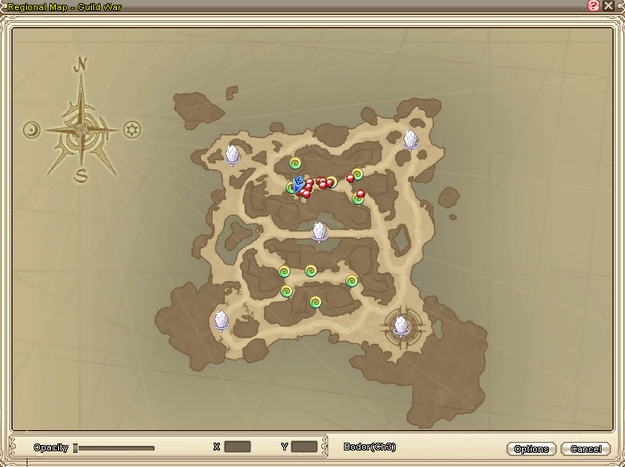 This is how the Guild War map looks. Press (M) to open your map. The red dots on the map are everyone on your team, both guild-mates and allies are shown in same color.

Placed around the map are these Quartz in different colors: 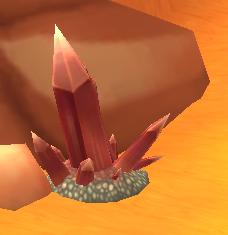 This is a way to gain extra Guild War points! Get the quest Dirty Crystal Destroyer (REP) from Colonel Kira in Kaslow (x=30, y=294) and complete these objectives:

When you turn it in, you get x amount of Crystal Guardian fame, it increases with your level.

There are also two portals, one in north and one in south, they're linked to each other and they let you exit combat when you go through them.

I have found my way to crystals, how do I help my team gain points?

How do I gain as much "Crystal Guardian" fame as possible?

If the war ends before 30 minutes has passed, you will gain a bonus. The bonus is set at your level x 10. The math for how points are rewarded is unknown for players, so I will skip that to avoid any misinformation.

Is there anything I shouldn't do in Guild War? 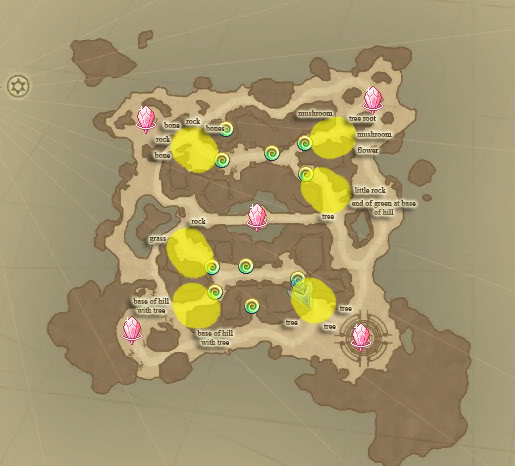 While standing inside these zones and attacking is a no, you're allowed to "pre-cast." "Pre-Casting" is where you stand outside the "no-no zone" and shoot inside it like this: 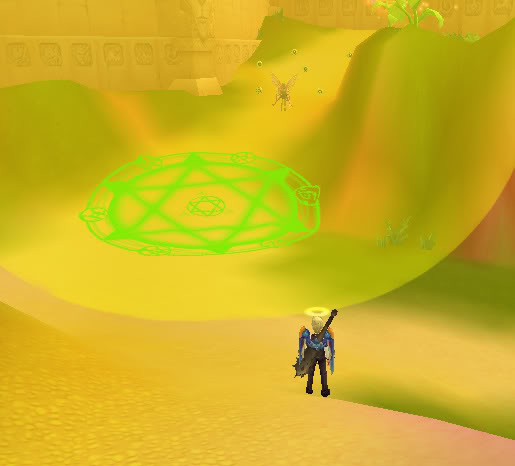 As long as you are not in the yellow zones or hitting the bits this is considered a bannable offense.

Where can I spend my "Crystal Guardian" points and on what?

Both the potions and mushrooms have their own cooldown, the mushrooms from Guild War box are stackable with the ones bought with Saphael's Hearts (PvP points).

Talents and Ancient Talents by Class

Retrieved from "https://grandfantasia.fandom.com/wiki/Kaslow_Guild_War?oldid=663"
Community content is available under CC-BY-SA unless otherwise noted.