Note: If you are signed up for Jale or Kaslow GvG, you will not be able to sign up for Ilya!

How to Check the Schedule

Note: Elder Norton also has information about the battle rules, how to get to the battlefield, and an explanation of Crystal Guardian fame, which you can earn from winning the guild war and can trade in for nice items from the nearby chest.

The top eight guilds will receive seeded qualifications for the Guild War. This doesn't mean your guild can't join in the battle: you can ally with the guilds for a shot at victory! Read on to find out more.

Only the top eight guilds registered are seeded automatically for the guild battle, but that doesn't mean other guilds can't compete! Each seeded guild is allowed to ally with up to three non-seeded guilds. The members of those guilds can then join the battle!

Note: Non-seeded guilds must NOT be seeded in either Kaslow's or Ilya's guild wars in order to make an alliance.

Note: You must be the Guild Leader of a seeded guild to request an alliance.

And presto, you have made an ally! All members of the allied guild that are level 31 or higher may now join you to compete in the guild war when the battlefield opens!

If you change your mind about the allied guild, you can cancel the alliance.

How to cancel an alliance:

Note: An invited guild does not have the ability to cancel an alliance. Only a seeded guild can cancel alliances.

The portal to the Ilya Guardianship Battlefield is conveniently located right next to the building where you can find Elder Norton, roughly (411, 255).

How to reach the battlefield:

But I can't get in! The portal's broken!
Don't panic! Check these conditions:

The battlefield portal will not let you through if you answer "no" to one of these questions.

How to Fight: Ancient Souls

After joining the battlefield, you will be teleported to either the Crimson Camp or the Blue Camp. Have a look around! The camps are well-stocked with:

Three teleporter gates next to the protective wall, which will let you out right on the other side.

Please note that until the battle actually begins, the Battlefield Portal and teleporter gates will not allow you to reach the battlefield. No head starts! 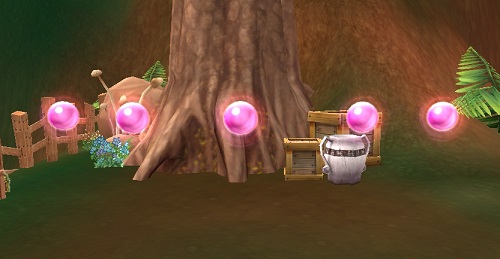 These ancient warriors can possess your character for a short period of time and grant you some cool new abilities!

The five Souls are:

To obtain a soul, right-click on one of the floating souls and wait 10 seconds. The soul will vanish and your appearance and abilities will change, your basic stats will increase, and you will receive a buff good for 20 minutes of fighting in your new form.

The souls will respawn in the base camp in 5 minutes.

Use your new form to protect your other teammates, defeat the enemy team members, and fight for victory!

How to Fight: Battlefield Flags and Towers

Once the battle officially starts, you can enter the battlefield and begin to fight. But the battle isn't just about fighting enemy players: you need to damage the health of the enemy's crystal, and to do that you need Battlefield Flags and Enchantment Towers.

You can see both on your battlefield map: 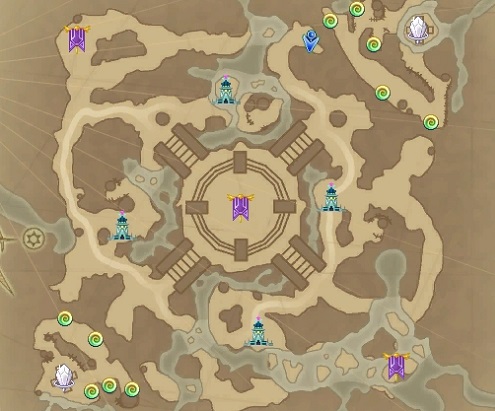 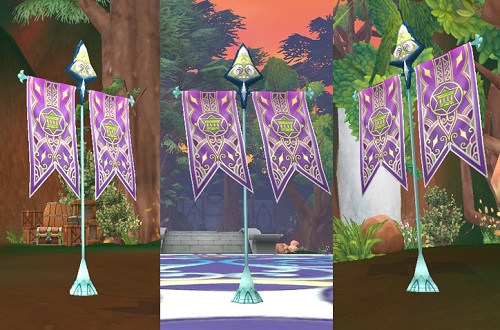 There are 3 Battlefield Flags in the arena, and you need these flags to awaken the ancient spirits in the towers. So it's time to capture them.

How to capture a flag:

Note: If multiple people try to grab the flag at the same time, whoever attempted first will be given the flag.

Carrying the flag is a great honor (notice the flag waving happily above your head) but it's also a heavy burden: possessing the flag will grant you a debuff and you cannot attack, cast, or use items while you hold the flag, and your speed will decrease 35%.

Note: If you cancel the buff or are killed while holding the flag, the flag will be dropped at that location and someone else may pick it up.

Gather your allies around you and fight your way to...

There are 4 Enchantment Towers in the arena, each holding a spirit. Bring the Battlefield Flags to these spirits, and they will assist you in your battle. 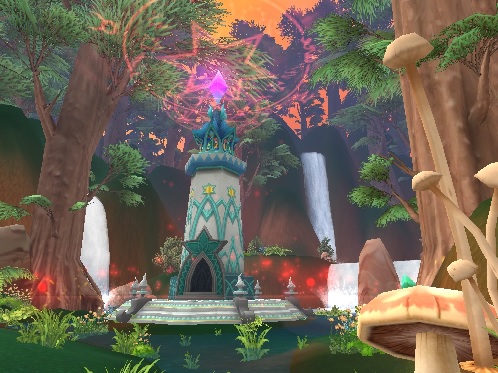 How to activate a tower:

Note: You cannot trigger multiple towers at the same time: priority will be given to the tower with the highest power and the countdown on the other towers will be reset.

So you fought the good fight, and your guild either won or lost. How can you tell how well you did?

At the end of the fight, a window will pop up displaying two smaller panels of information: Guild Battle Statistics and Personal Battleground Statistics.

The Guild vs Guild window displays the guild statistics:

The Personal Battleground Statistics window displays stats based on your individual performance, awarding a rank from A-D:

Total Reputation: Guild Battle Statistics + Personal Battleground Score = amount of honor points awarded to you at the end of the fight.

The guild that wins first place in the guardianship battle receives guardianship rights over Ilya! They will gain the ability to open the Guardian Treasure Chest found next to Elder Norton, and can purchase the items inside with the honor points they earned in the battle!

A new battle takes place each week (the ranks will be reset during weekly maintenance) so if your guild didn't win one week, you might win the next!

Where can I spend my "Crystal Guardian" points and on what?

There's four boxes located at around X:28, Y:294 in Ilya. Starting from the left:

Both the potions and mushrooms have their own cooldown, the mushrooms from Guild War box are stackable with the ones bought with Saphael's Hearts (PvP points).

Talents and Ancient Talents by Class

Only the Keeper’s Box would require you to be the Guardian Guild for the City in order to open it. All other boxes (ie, ‘Resource Box’) do not have any requirements to open them and you can purchase items from them as long as you have enough Crystal Guardian Points (GvG points).

Original guide from here, thanks to [GM]Megane!
Additional information, including Keeper's box info and updates by michelleurs.

Retrieved from "https://grandfantasia.fandom.com/wiki/Ilya_Guild_War?oldid=661"
Community content is available under CC-BY-SA unless otherwise noted.