So what does this even do?

Well. This is actually pretty simple, It gives your costumes a stat boost!. As of now, I'm sure most players are already acquainted with the GM enchants - older items that give costumes additional stats, like +8 STR or the coveted +16 VIT. Well, that's mostly what this does(though not exactly).

GM enchants? Hey, what does that do if we already have GM enchanted costumes?

While green GM enchanted gear is eligible both as a Costume Alchemy target and as a crafting ingredient, using it as a target will - reroll your GM enchanted gear and you will lose your GM enchanted stats. Likewise, using it as a crafting ingredient means you will lose the item forever and there's nothing anyone can do about it for you.
To repeat that if you use a costume as a Costume Alchemy target you'll lose all stats previously on it and it rerolls to something new and different and it can't be changed back.

So how do I do costume alchemy? 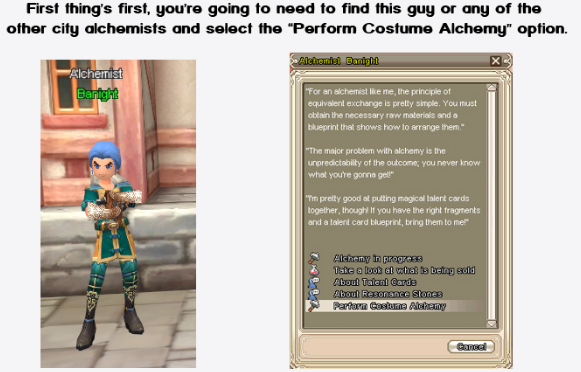 Genki and non-genki costumes are not interchangeable. In order to alch one, you must use the same type as ingredients. There’s two more things you should know about this: 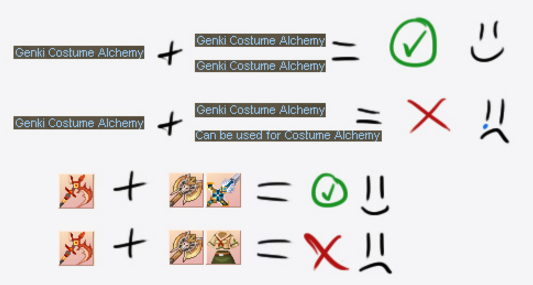 If your costume piece is white all your ingredients must be white. If your costume piece is green, all your ingredients must be green.
In order to even attempt this Costume Alchemy system, you'll need a specific material called Magic Alchemy Pieces. You're going to need 3 per attempt for hats, bodies, back-gear (wings), 1h weapon and shield costumes - however, you'll need 6 per attempt for 2h weapon costumes.

IE. In order to use my Sprite Swagpack as a Costume Alchemy target I'll need three specific requirements: 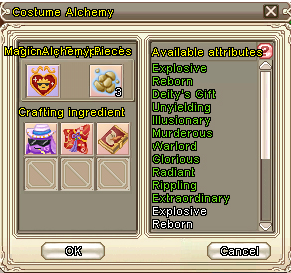 From there, one of two things will happen. Either it'll roll and give me a white stat'ed Swagpack back, or give me a green one.

If you really need to know the stats of "Can be used in Costume Alchemy" costumes, most of them are just half of the Genki Costume Alchemy totals; without the special prefix options at the top.

Retrieved from "https://grandfantasia.fandom.com/wiki/Costume_Alchemy?oldid=1163"
Community content is available under CC-BY-SA unless otherwise noted.